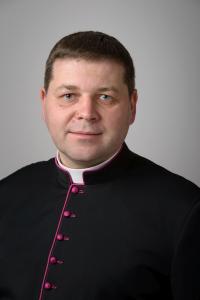 He finished the Ferenc Kiss Forestry Vocational Training School of Szeged in 1994 He studied theology in Veszprém and Szeged as the student of the Roman Catholic Archdiocese of Kalocsa–Kecskemét, then later in Rome as a student of the Collegium Germanicum et Hungaricum

2004-2007: he was a chaplain in Kiskunfélegyháza
Since 2004, he has been teaching courses at the Gál Ferenc University of Szeged.
2006: he acquired his doctorate (hist. eccl.) at the Pontifical Gregorian University from church history in Rome, which was recognised by the Faculty of Humanities at the University of Szeged next year as a doctorate in history (PhD)
2007: he was a chaplain in Soltvadkert
2007-2011: he was the Secretary of the Apostolic Nuncio in Budapest, while he was a curate in Tiszakécske between 2007-2008, and in Kecskemét between 2008-2011
2011-2018: he was the rector of the Pontifical Hungarian Ecclesiastical Institute in Rome and he was the procuratore of the Hungarian Catholic Bishops’ Conference in Rome
Since 1 August 2018, he has been the General Secretary of the Hungarian Catholic Bishops’ Conference
Since 18 May 2019, he has been the ad nutum Sanctae Sedis pontifical assistant for the Congregation of the School Sisters of Our Lady of Kalocsa
Since 11 November 2019, he has been the consultor of the Pontifical Council for Culture

Besides his assignment as the General Secretary, he is a curate at the Holy Family Parish of Kecskemét

Church historian, professor, full member of the St. Stephen's Academy of Sciences and author of several books and publications in Hungarian and foreign languages